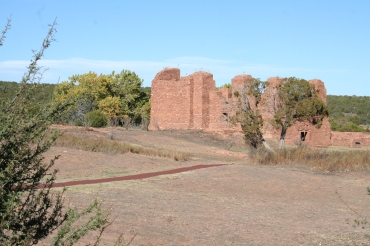 About 80 miles Southeast of Albuquerque is Mountainair, NM. It is the headquarters of the Salinas Pueblo Missions National Monument. On Sunday afternoon we visited the Abo and Quarai missions. In 1581, the Spanish visited the area and found a thriving agricultural society which used the Abo Pass as a trade route between the Rio Grande Valley and the Plains Indian tribes.

The life of the Pueblo Indian was hard, they relied on dry land farming for much of their food and they stored food from years of plenty to help during the years when there was little rain. The Salinas Valley had been occupied since the 900’s by the Mogollon people followed in the 1100’s by the Anasazi.

Between 1581 and mid-1600’s, the Spanish established 3 missions in this area. The Franciscan Friars convinced the Indians to convert to Christianity and provided religious instruction. The Indians worked in the fields, hunted, and made pottery and textiles for trade.

Around 1670, the area was hit with drought, epidemics and wide-spread famine which killed many people. The Apache Indians attacked the missions in retaliation for raids by the Navaho Indians and Spanish, which captured many Apache as slaves. The Salinas Pueblos and Missions were abandoned during the 1670’s. The people moved to the El Paso area. The Apache prevented resettlement of this area until the mid-1800s’.

Both Missions that we visited were impressive, Abo is very large, many walls still stand and the layout of the mission is easy to understand. Quarai is the most complete mission but it is not as large as Abo. Neither of the missions have many of the native Pueblos excavated. We both enjoyed the stark desolation and majesty of the Abo mission.

One of the things not fully understood about these missions is the inclusion of kivas, underground rooms the Pueblo Indians used for religious ceremonies and training. But both churches have one. The kiva at Quarai is square not the traditional round kiva found at Abo. The blending of Catholicism and the native religion was a way the Pueblos came to be accepting of the priests and their teachings. But the priests were not known for being tolerant of native religions. So this brings us back to the question, why were kivas included in the missions?

On the way back to Albuquerque, we traveled a portion of the Salt Missions Trail scenic byway north to I-40. This trail goes past the Abo and Quarai missions.