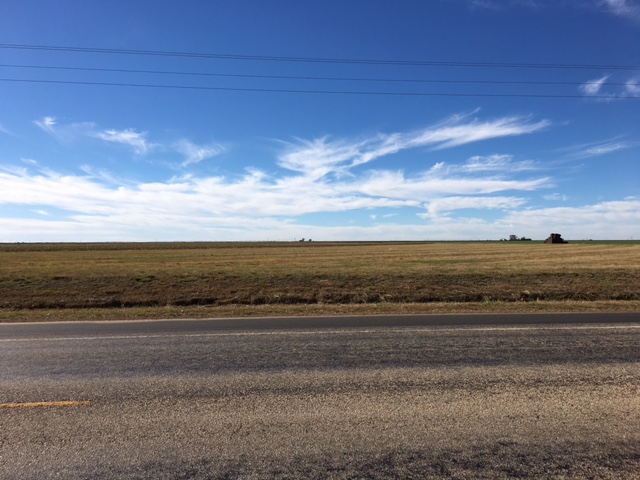 Fields as far as you can see 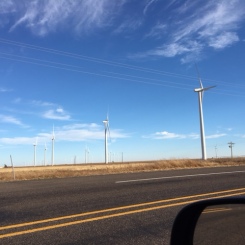 Wind farms as far as you can see

This is day two of our stay in Muleshoe, TX. While Muleshoe might not be on the top places to visit, it has a great restaurant, Dinner Bell. Had dinner there last night and there was an amazing number of meals they were preparing for a Tuesday night. They had a steady stream of customers in the restaurant and were taking to go orders all evening. When we arrived, there was a stack of about 10 orders waiting to be picked up. Do give them a try.

Today, we slept late. Yep, sometimes we do that. Then we took a drive, basically going north just because we had gone south yesterday.

This part of Texas is very flat. Lots of farms growing cotton, corn, hay, milo (I think that was what it was), and then there are the ranches. From the ranches, you have a need for feed lots for the cattle as they are preparing to take them to market. Lots, and lots of feed lots – very large lots.

You can see from horizon to horizon and not see the end of the field. Elaine loves it. She says this way no one can sneak up on you as you can see them coming a mile away – literally a mile (or more) away.

We visited several towns, all with agricultural based economies. Hereford (like the cow) was the largest one we visited. There are Hereford statues everywhere.

In Dimmit, we learned about the Ozark Trail. This trail is a collection of roads that connected St. Louis, with El Paso and Santa Fe, NM. These roads comprised the major highway system in the region until U.S. Highway 66 was built in the 1926.The trail was marked with 21 obelisks, only 7 remain today and one of them is in Dimmit. The Ozark Trail predates the US Highway system and was maintained by cities, counties, and private individuals. There was a need for roads for automobiles in the 1920’s and people stepped up, created and maintained them.