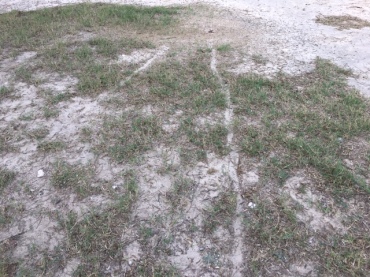 We are set up in Kingsville, TX, enjoying the sights in the area. Also, Elaine’s glasses broke so we are waiting for new ones to come in.

Near Kingsville is Baffin Bay. We traveled around part of the three-finger bay looking at the sights and checking out some of the houses. It is a bay that at one time opened to the Gulf, but now Padre Island blocks it from the open waters of the Gulf. Baffin Bay is good fishing for black drum and large spotted seatrout. The water is very salty but does not support shellfish.

There is a nice county park with an observation tower, fishing pier, dock, playground, a small beach, and a skeet shooting range. The county runs a RV park that looks nice. We have put it on our list of places to stay in the future. We have already paid for our current site, which is very nice but doesn’t have the same ambiance as the county park.

One thing we found at the park were ant hills – big red ants not fire ants. The ants have beaten down trails leading to their hill. Never seen such well-worn trails.

We came across a large flock of Sand Hill Cranes, probably about 50. They were in a freshly plowed field. Expect the homeowners in the area have a noisy chorus when they start “singing.” If you have never heard Sand Hill Cranes, you have missed something that you will never forget. The sounds they make are what I expect some dinosaurs made. Their squawk is really loud and carries for what seems like miles.