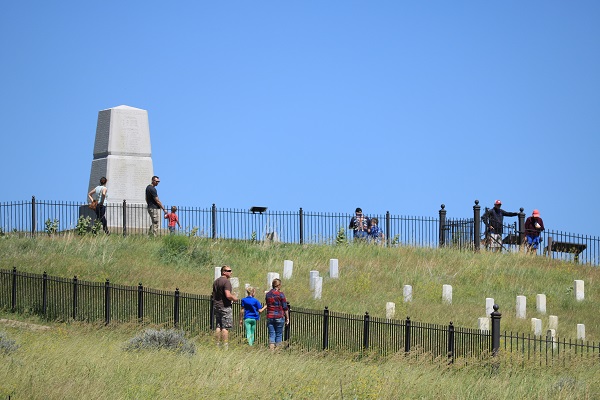 Today we visited the Little Bighorn National Battlefield. This is the site of a great victory for American Indians gathered beside the Bighorn River. At first glance, it doesn’t look like much of a place to visit, but for those interested in history, military tactics, or just want to learn more about the American Indians it is a great stop.

Outside the visitors’ center is the Custer National Cemetery that is full of veterans from the Indian Wars up through Viet Nam. It is a somber reminder of what our military have given for our country.

At the Visitor Center, we joined an informational talk that was given by one of the park rangers. He told the story of the battle, what lead up to the battle, background information about some of the key players in the battle, and pointed to different places on the hillsides as he told about the advances and retreats in the battle.

From the there, we walked up to the monument on the Last Stand Hill, which lists the names of those cavalrymen, scouts and civilians killed during the battle.

Last Stand Hill is where Custer and what remained of his immediate command were killed. Custer had divided his regiment (31 officers and 566 enlisted men) early and often, he had only 200 or so soldiers remaining in his immediate command when he and Reno’s command attacked an Indian village that had over 1500 – 2000 warriors. Each solider had about 100 rounds of ammunition for his rifle and less than 50 rounds for his pistol. The Indians said later that they never expected that anyone would attack their large village.

Accounts differ, but those who were not with Custer’s immediate command were also under attack and were unable to provide support to him during the brief time before his command was overrun Reno’s command retreated southeast and Custer retreated northeast, the commands were about 3 miles apart).

The Indians removed their dead from the battlefield and buried them privately, so we do not know how many of them were killed during the battle or their names. Best estimates say that about 63 Indians died

From the monument, there is a short walk that provides more information about the battle and the Sioux chiefs that lead the battle: Sitting Bull and Crazy Horse. There is a memorial wall that has carved images of the chiefs and quotes from them. The quotes regarding the battle show surprise that the Calvary would try to attack since there were so many Indians gathered there. There was a comment about how the Indians overtook the Calvary men and would knock them off their horses, comparing this part of the battle to a great buffalo hunt. But there are other quotes indicating a desire for respect.

We took the drive through the park and found a walking trail at the end of the drive. It is the site of the Reno-Benteen Battlefield and is where the survivors of Custer’s command fought. Reno had a group of soldiers that made the initial attack on the Indian encampment and Benteen was in charge of the supplies and had a group of soldiers with him. Benteen had ignored Custer’s messenger to bring the ammunition to him. Reno had retreated to Benteen’s location looking for Custer. Somehow the gun shots from the raging battle less than 3 miles away were not heard by these leaders and Custer with his men died. Even though Reno-Benteen had secured a place to fight, if it had not been for the arrival of General Terry’s relief column the next day, it is certain that they would have perished. Eventually the Indians would have overwhelmed the Reno and Benteen commands.

The walking trail had stops along the way where you could read about what had happened at those locations. There were also sites where trenches and rifle pits had been dug. The site of a makeshift field hospital was located is marked. From this mound, you can see Bighorn River. During the battle, the troops ran out of water. A group of volunteers went down a ravine, and carried water back up to the troops. Four sharpshooters went with the group to provide protection. Twenty-four Congressional Medal of Honor Medals were awarded to this group of men.

Looking across the hills you see scattered white tombstone shaped markers that indicate known places where soldiers and civilians that were traveling with Custer died. There are a few markers that identify were some of the Indians died. Combine these markers with the rows of markers in the National Cemetery at the visitors’ center, it was a very sobering and somber memorial for us.