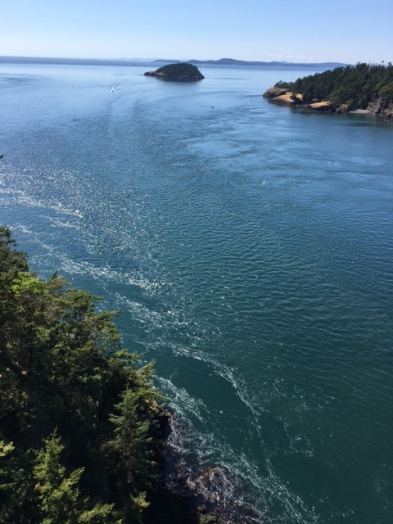 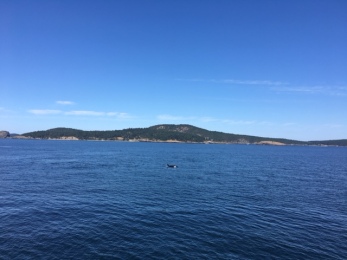 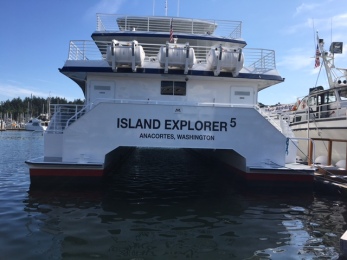 Our last day visiting Everett and Kennewick, WA. We have been here almost two weeks, most of the time spent in Everett.

One of our Everett adventures was to go whale watching. We boarded the Island Explorer 5 in Anacortes on the Whidbey Island. This ship was designed for whale watching by the owner of the company. It is wide, lots of viewing areas, a great galley, and the ride had almost no rocking. We saw 14 orca whales on the trip and almost 3 hours of the trip was spent observing them. The captain said this was the most that had been seen on a cruise in a very long time. We didn’t find any humpback whales but the orcas were fascinating to watch.

There were several pods that we followed at different times during our trip. They put on a great display of their mastery of the sea – breaching (jumping out of the water), hunting food (they love sea otters, these pods preferred mammals instead of fish), and such. The crew kept us informed about the other wildlife we passed as we traveled through the area. We passed a group of small islands where sea otters were lounging on the rocks. Pictures do not do justice to the beautiful scenery, animals, and such that we saw.

We learned many things on the trip, but one of the most unusual things is there is a dog, Jack, that is part of a research group that tracks and monitors the whales. Jack’s job is to find whale poop. This is not a joke. He smells whale poop and alerts the humans where to find it so some of it can be collected to be tested and document the general health of the whales. Whale poop is not solid and dissipates very quickly in the water, so Jack must act fast. It is reported that during training that one of the whale poop smelling dogs located whale poop that was in a canister sunk in 300 feet of water and over 10 feet of mud. That’s some kind of nose!

We said goodbye to Ann and Rick and spent our last nights in Kennewick where we got to see Chris, Nicole, and Mckenzie. Mckenzie has grown so much and has a really good vocabulary.