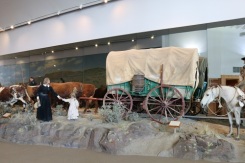 We are in Baker City, OR. This is a neat small city with lots of history. Just north of town is the National Historic Oregon Trail Interpretative Center  where you can learn about the Oregon Trail. This center sits high upon a large hill and it has a spectacular view of the surrounding area. The day we were there some volunteers were doing a Dutch oven cooking demonstration. They made a soup that could have been consumed while traveling the Oregon Trail. It was made of bacon, potatoes, heirloom turnips, and heirloom beets (seeds from the 1800s). The beets were red and white striped, I’ve never seen any like them. For spice, they had added some pepper seeds, celery, and salt. It was delicious.

We took the historic walking tour with a guide. The walking tour makes a short loop (only about ¾ mile) around half of the center. There were a few wagons, Prairie Schooners, which were the most popular wagons used on the trail set up in an encampment. From there, you look down upon the trail. We later went down to the Oregon Trail where we saw the ruts made by the thousands of wagons that traveled over it in the years 1830 – 1869. Estimates vary from 400,000 to 500,000 persons who traveled the 2170-mile trail from Independence, MO to Oregon City, OR. The trip took up to 186 days to complete.

The last stop on the trail was at a mine. Gold was found in this part of Oregon. Not a lot of gold, but enough that for about five years, there were wild and notorious gold mining towns throughout the region. Most of the goldminers have moved on and some of the towns are gone.

From the interpretive center, you can see an active tungsten mining operation. The mine was originally established to mine gold, but there wasn’t enough gold to support the mine. When tungsten was discovered, the mine changed its focus and is now a working tungsten mine. They still take out a small amount of gold every year, but tungsten is what pays the bills.

To the north of Baker City is Hells Canyon, you may have seen it in an episode of the TV reality series “Unplugged Nation.” This is the deepest river-cut gorge in North America. It is over a mile and half deep (7,993 feet). The Snake River travels through the canyon with many springs and smaller rivers feeding it. The area is beautiful. From the overlook, you can’t see the bottom of the canyon or the river but the scenery is great.

Hells Canyon Overlook is in the National Forest. The road is well maintained (but only June thru September). There are restrooms along the way – don’t expect anything fancy and you won’t be disappointed. We did meet up with some cows (part of the forest appears to be leased to ranchers), that were roaming along the road. They didn’t seem to be concerned that they were blocking part of the narrow road. After that we went a little slower along the winding road up to overlook. During the 2-hour trip up and back from the overlook we did see about a dozen automobiles.