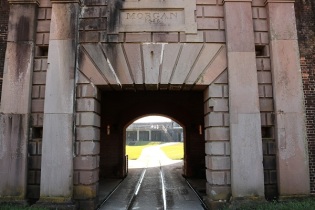 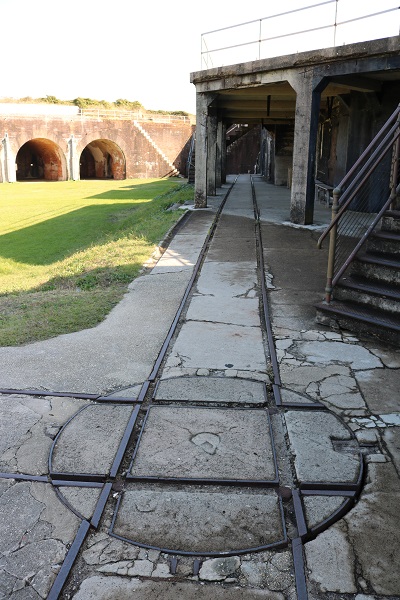 Today we visited Fort Morgan State Historic Site near Gulf Shores, AL. We had a wonderful time climbing the walls, entering the rooms, imagining the life of those who were stationed there, children would love this place. The views of the Gulf of Mexico and Mobile Bay are wonderful. Each year, there are numerous historical civil war events held at the fort.

There are also great beaches available at Fort Morgan and vacation cottage rentals. This area is remote so if you wish to do anything besides fish, swim, sun, or visit the fort, you’ll have a 20-minute trip to Gulf Shores before you have a good selection of restaurants and shopping.

The fort has a good museum with maps, plans and details of the battles fought there. The fort is located on a barrier island east of Mobile Bay and is accessible by land at the west end of Alabama route 180 from Gulf Shores, AL or by ferry from Dauphin Island, AL (check schedule).

This is a stone fort that was built to protect Mobile and has a wonderful view of the Gulf. It was built in 1834. It is built on the site of an earthen and stockade type fortification, Fort Bowyer, which had successfully defended Mobile Bay during the war of 1812 before the Battle of New Orleans. After the British were defeated in New Orleans, the British successfully captured Fort Bowyer to land troops in Mobile, but a few days later received word that the war of 1812 was over. FYI, the location of Fort Bowyer on the map in the book “Andrew Jackson and the Miracle of New Orleans” by Brian Kilmeade and Don Yaeger is incorrect. The fort is located on the east side mouth of Mobile Bay instead of the west side.

Fort Morgan was built with stone and layers of earth to fortify it further in the shape of a large 5-point star. It was used as a fort up until 1946. It has served to protect the harbor with various types of heavy artillery. During the Civil War the fort was besieged on land and from the sea for two weeks by Union forces. On August 5, 1864, Union Admiral David Glasgow Farragut’s force was unable to traverse the channel into Mobile Bay because of the mines (torpedoes) and the fort’s artillery. Farragut decided to cross the mined area into the Bay with an order attributed to him “Damn the torpedoes, full speed ahead”. This was a calculated gamble that the wooden mines may have been in place so long that they had become waterlogged (the majority had).

The fort was subjected to a day-long bombardment on August 22 from 16 siege mortars, 18 guns of various sizes, and the fleet, the monitors and Tennessee at short range and the rest of the ships at long range. Confederate Brig. Gen. Page feared that the bombardment would endanger his magazines, which contained 80,000 lbs. of powder. To avoid the risk, he had the powder brought out and flooded. That night, the magazines were indeed threatened when the woodwork of the citadel caught fire. The fire brought an increase in the rate of bombardment, and was extinguished only with great effort.

Feeling now that further resistance was useless, on August 23 Page ordered his remaining guns spiked or otherwise destroyed as far as possible. At 6 AM, he ordered the white flag raised, and the siege was over

Union forces used the fort as a base for reconnaissance raids and then as a staging area for the Battle of Spanish Fort and the Battle of Fort Blakely shortly before General Lee surrendered at Appomattox.

During World War I the fort was used to train men in coastal artillery weapons. The fort also trained field anti-aircraft batteries. In 1920, the fort received 4 British 9.2-inch howitzers. These guns were abandoned and later scrapped in 1924.

In 1942 the Army re-occupied the fort and constructed an adjacent airfield. The Army placed 2 Model 1918 155 mm guns on top of the fort on mounts that permitted 360 degrees travers.

In 1946 the fort was turned over the State of Alabama.

Today, the fort is a great way to learn a lot about history. Walking the walls and seeing the gun emplacements, really gives you a different feel for the importance of this fort. The small confines where some of the cannons were fired from, remind us that it must have been noisy, hot, and dangerous to the soldiers responsible for firing the weapon. In 2004, while doing some repairs to the fort, an unexploded armament from the War of 1812 was found buried in the bunkers near the wall. Looking over the walls you see a picturesque ocean view making it hard to imagine war ever touched this shore and such a place was necessary.

2 thoughts on “Seaside View of History”