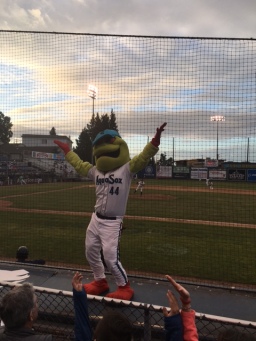 We have arrived in Everett, WA for a visit with Rick and Ann (brother-in-law and Elaine’s sister). They are great hosts and have planned several outings for us. The first one is see the Everett minor league baseball team, the Aqua Sox. They are in the Short-Season Class A Northwest Region. Many of the players in short-season have just completed their college careers and have been drafted. So the players are good but not necessarily great, which makes for good baseball watching.

If you have ever attended a minor league game, you know it can be a great baseball event because the players are trying so hard, and there is always something going on at the park to help drive attendance. At the Aqua Sox games, they have a mascot that is a frog like creature named Webbly. We have no idea how the team got its name or why they have a frog as a mascot, but that didn’t spoil the evening’s fun. There were spectator participation events – races and catching activities. All fun.

During the game, the wind shifted to come in from the Possession Sound, it turned cold enough that we were glad to have worn jackets and hats. The blankets were also appreciated. The Aqua Sox won and it’s always a good night when the home team wins.

We made a day trip to Whidbey Island. It is the fourth largest island in the US and there are about 100,000 people that live on it. Most of the island is dedicated to parks, with interesting history of artillery being placed here to defend the coast during WWII. There is a bridge you can use to get to the north side of the island but the ferry is faster from the south.

The annual Whidbey Island Race Week was going on. We watched some of the sailboats racing. It looked scary watching the ships so close together tacking around a buoy. But to add to the confusion of the race, boats not racing were sailing all around the area. It was beautiful to watch.

At Coupeville, you find a quaint downtown area set next to Puget Sound. There is a fish smell throughout the area, which may be why lavender is grown in almost every yard. There is a lavender shop where you can buy many products made with lavender including ice cream and scones. We did try a couple of the scones and they were pretty good –  enjoyed the lemon curd one the most – but the lavender is an acquired taste.